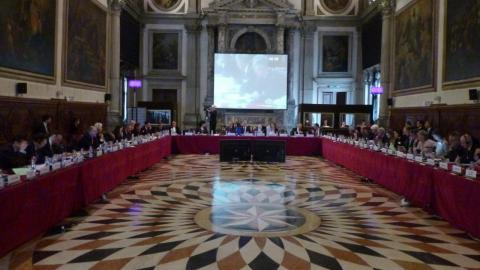 Pressure is growing on the Albanian government over its "anti-defamation" laws, after the Parliamentary Assembly of the Council of Europe, CoE, said it had asked its advisory body, the Venice Commission, for its opinion.

"The Monitoring Committee of the Parliamentary Assembly requested an opinion of the Venice Commission concerning the Albanian Law no. 97/2013 'on Audiovisual Media Service'," the committee announced on its website on Wednesday.

On Tuesday, Ana Pisonero, the European Commission spokesperson, repeated Brussels' concerns about the laws to the Albanian media - noting also that the Albanian President shared those concerns.

"The European Union supports the European Council recommendations on this law. We see the fact that the President of Albania turned the law for further discussions in the Parliament as a possibility to address such concerns," Pisonero told ABC News.

Unbowed by criticism, Taulant Balla, head of the ruling Socialist Party's parliamentary group, announced on Facebook that the party would move forward with the two laws and over-ride the presidential veto. "We will dismiss the decrees of the President," Balla wrote on Facebook.

The laws create a Complaints Commission within the Albania Media Authority with the power to review the content of online media outlets and levy heavy fines if online media refuse to remove content that the commission deems questionable.

The laws were approved despite bitter protests from local and international rights organisations last December. But President Ilir Meta said he was concerned the laws were anti-constitutional and returned them to parliament.

However, a simple majority in parliament, which Socialists have, allows them to over-ride Meta's objections. After...