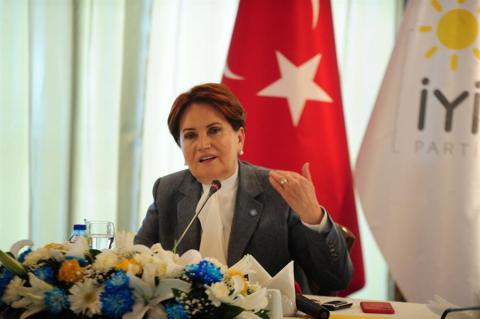 The establishment of new political parties is beneficial for Turkey and the voters, the leader of oppositional İYİ (Good) Party leader Meral Akşener has said.

"It will increase competition during elections. We are rivals with both two parties and also [main opposition Republican People's Party] the CHP and the AKP," Akşener told a group of journalists on Jan. 22.

The two parties Akşener was referring to were those of former Prime Minister Ahmet Davutoğlu and former minister Ali Babacan. Even though Davutoğlu established his Future Party last month, Babacan says his party's establishment preparations are ongoing.

When asked about possible alliances with the new parties, Akşener did not rule out the possibility, but said it is not "right to talk about tomorrow from today."

The shift to the presidential system has not functioned well and President Recep Tayyip Erdoğan will want a return to a strengthened parliamentary system, Akşener claimed.

"I wish the presidential system had worked since the 2017 referendum. I wish we were proven wrong when we said 'no.' But it did not work. Now, we face a system in which everyone holds Mr. Erdoğan responsible when anything happens. This is a situation brought by the one-man regime," she said.

With a referendum held on April 16, 2017, Turkey shifted to an executive presidential system from a parliamentary one. Some 51.3 percent of the more than 58 million Turkish voters said "yes" to the ruling Justice and Development Party's (AKP) constitutional amendment package.

"People are unable to breathe. The solution is an ameliorated and strengthened parliamentary system. We have 150-years of experience in the...