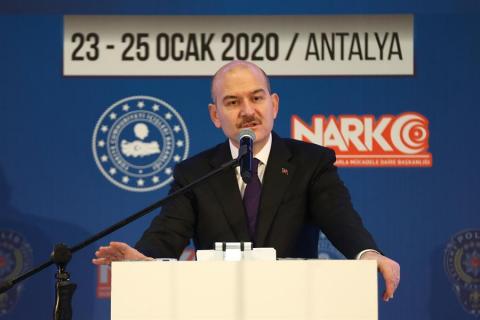 "If we hadn't conducted Operation Olive Branch in Afrin, the PKK would have turned it into the world's largest drug center. This basically shows what we are facing," Süleyman Soylu said in an evaluation meeting in Turkey's southern province of Antalya on combating narcotics crimes.

Soylu stressed that instability, income inequality, terrorism and violence triggered by proxy wars have allowed a window for both drug trafficking and migration in the Middle East.

He accused Europe and the U.S. of inconsistency in their relationship with the PKK, saying that they have not hesitated to provide a lifeline to support the terror group, giving weapons and asylum, as well as financial resources.

"Since the PKK does not carry out armed terrorist activities in their countries, they turn a blind eye to the drug terrorism," Soylu said.

He underlined that while Turkey saw 657 drug-related deaths in 2018,  this figure will probably be below 500 in 2019 once all the forensic data processes are completed.

Soylu stressed that Turkish security forces "intervened at every  point where they detected drugs."

He went on to say that anti-narcotics operations in the field had  achieved "significant momentum."

He also highlighted that while the number of detainees was 7...