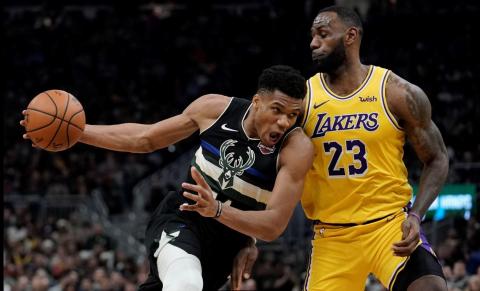 The NBA announced the All-Star starters for the 69th All-Star Game that will be held on February 16.

Milwaukee Bucks' Giannis Antetokounmpo and Los Angeles Lakers' LeBron James will be the captains for their teams as they received the highest vote turnouts in their respective conferences.

Also, 20-year-old Luka Doncic from the Dallas Mavericks and 21-year-old Trae Young of the Atlanta Hawks -- both having their sophomore season -- will highlight the star-studded group in the All-Star Game.

Just like 2019 and 2018 NBA All-Star editions, the team captains remain the same as Antetokounmpo and James will pick players for their squads, once the 12-men squads from Western and Eastern Conferences will be announced.

Drafted as the 15th pick in 2013 out of Greece, team captain Giannis Antetokounmpo is the man for the Bucks (#1 in East) this season too, averaging 30.0 points, 12.9 rebounds and 5.6 assists per game this season.

Making his first All-Star appearance, 2016 draftee Pascal Siakam of the Toronto Raptors (#3 in East), averaging 23.5 points, 7.7 rebounds and 3.5 assists per game this season.