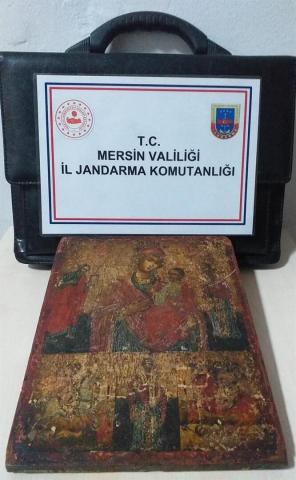 The Directorate of Anti-Smuggling and Organized Crime Branch, affiliated with the Provincial Gendarmerie Command, was informed that a café held a historic painting. During the operation, the officials seized the 25x30 centimeter wooden painting. The panting was delivered to the Museum Directorate for further analysis.

According to the first result of the analysis, the painting features Jesus in the arms of Virgin Mary, along with five other figures. Red and green colors dominate the painting, dating back to the monotheistic era between the 11th and 13th centuries.

The suspect was released after his testimony.