Transparency Questions over Albanian Effort to Rid Courts of Corruption 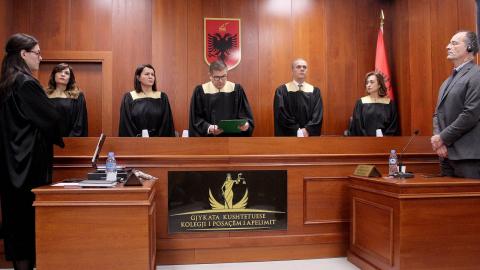 For the first time, however, the IMO observer assigned to the case - Italian judge Ferdinando Buatier de Mongeot - objected, and asked that his dissenting opinion be published alongside the Chamber's decision.

Huddled in conference, the Chamber's judges voted 6-1 against the request, according to documents obtained by BIRN via a freedom of information request.

The decision set a precedent for the handling of all future dissenting opinions from the IOM, and raises questions about the transparency of a vetting process intended to encourage public trust in the Albanian judicial system.

Buatier de Mongeot's opinion was eventually published in July 2019 on the webpage of the EU Delegation in Tirana but for Albania it remains officially under lock and key. Sevdari said she had been rebuffed when she asked the Special Appeals Chamber to see the document.

"I learned of [its existence] after it was published in the media," the ousted prosecutor told BIRN.

Sevdari's dismissal was backed by four of five judges of the Special Appeals Chamber. The one dissenter, Ina Rama, argued that the prosecutor had indeed provided evidence of the source of her income and that of her husband but not that taxes had been paid on it. This, Rama argued, was not sufficient grounds for her dismissal.

Buatier de Mongeot similarly argued that the question marks over Sevdari primarily concerned the payment of taxes abroad, that the judicial panel had wrongly interpreted the law and that there was insufficient evidence of wrongdoing to justify her dismissal.

He asked that his opinion by published alongside the Chamber's verdict, in...