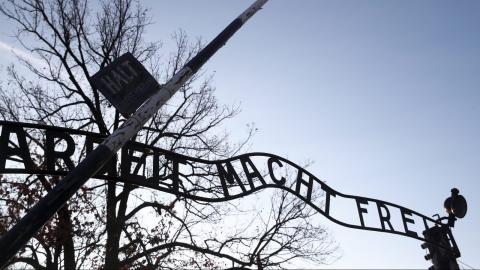 In June 1947, the Auschwitz-Birkenau State Museum in Oswiecim, Poland opened on the grounds of the former death camp. In 1960, the museum allocated space for 'national exhibitions,' which focused on the countries from which citizens were deported to the camp.

The Yugoslav national exhibition opened in 1963 on the initiative of the Yugoslav Veterans Association of the National Liberation War.

The exhibition displayed mostly images of the Yugoslav Partisan resistance, graphic pictures of torture and suffering of Yugoslav camp inmates, photocopies of German documents describing immense Yugoslav casualties in the war, including orders for massive reprisals against Partisan acts of resistance.

The presentation also included some original artwork, including sculptures by Vida Jocic, herself an Auschwitz survivor. Completely missing from the exhibit - but very much in line with global World War II remembrance of the time - was any separate memorialisation of Yugoslav Jews and Roma killed in the camp on the basis of their Jewish or Roma rather than anti-fascist identities.

Yugoslav Partisan resistance remained the focus of the updated Yugoslav national exhibition, which opened in 1988 with new visual and textual artefacts, and organised by the Museum of the Revolution of Yugoslav Nations and Ethnic Minorities. The 1988 exhibition kept some of former Auschwitz prisoners' sculptures but added many new items.

And while communist insistence on anti-fascism and refusal to acknowledge Jewish or other ethnic or racial suffering as anything other than generic 'victimhood under fascism' was clearly reductionist and exclusionary, the end of communism produced its own memory inversion and exclusion.