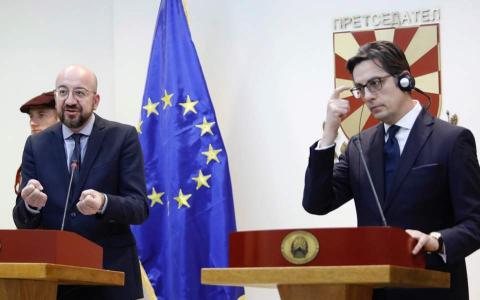 The President of the European Council said on Friday the bloc will be holding intensive discussions in coming weeks on how future enlargement should be managed.

Charles Michel, who was in the Albanian capital, Tirana, to meet with Prime Minister Edi Rama, said all member countries "are unanimous on one point — that the Western Balkans' future should be toward Europe."

The hopes of Albania and its neighbor North Macedonia to launch EU membership talks last year were blocked by French President Emmanuel Macron in October when he asked for a reform of the process for admitting countries to the 28-nation bloc, which caused deep disappointment in both Balkan countries.

Speaking at a joint press conference with North Macedonia's President Stevo Pendarovski later Friday in the capital, Skopje, Michel said Brussels is preparing a new methodology which will be open to...