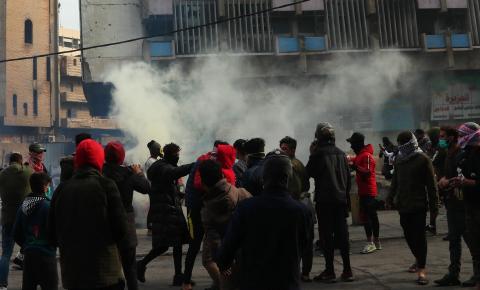 There were no immediate reports of casualties but at least seven people were wounded in clashes with police earlier in the day, medics and security sources said.

The clashes took place after authorities began removing concrete barriers near Tahrir Square and across at least one main bridge over the Tigris River in Baghdad.

In the southern city of Basra, security forces raided the main anti-government sit-in overnight and deployed in force to stop protesters gathering there again, security sources said. Police arrested at least 16 protesters in Basra, they said.

The actions appeared to be an attempt to fully clear out anti-government sit-ins and end months of popular demonstrations that have called for the removal of Iraq's entire ruling elite.

Security forces began the raids just hours after populist cleric Moqtada al-Sadr said he wound halt the involvement of his supporters in the anti-government unrest.

Sadr had supported the demands of protesters for the removal of corrupt politicians and provision of services and jobs soon after the demonstrations began in October but stopped short of calling all his followers to join in.

Many of Sadr's millions of supporters who hail from Baghdad's slums have been involved in demonstrations, however.

Sadr's followers held a march on Jan. 24 calling for a removal of U.S. troops from the country in a rally separate from the anti-government protests. The march, which some observers expected to descend into violence, dissipated after several hours.