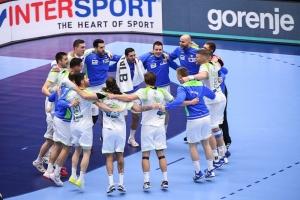 Slovenia did not manage to bounce back from yesterday's semi-final match against Spain (32:34), while the Norwegians celebrated after a painful loss to Croatia in the last seconds of the other semi-final.

It was a sloppy and slow affair in the first half, with Norway making a run by the 20th minute to secure a four-goal lead, and never looked back thereafter. They did not let Slovenia to come close, also with help from some stellar goalkeeping.

Slovenian head coach Ljubomir Vranješ, who took over the team only a month ago, said that the player had done a tremendous job at the tournament but "it is not enough", adding that the whole tournament had been difficult.

Captain Vid Kavtičnik, who did not play in the match due to injury, said that "of course we are sad, but still, the fourth place is amazing," noting that the team did not have much time to prepare...