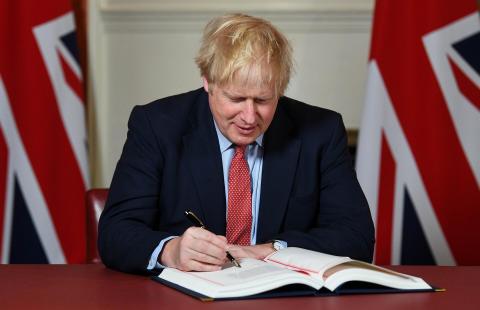 Prime Minister Boris Johnson on Jan. 24 hailed "a new chapter" in Britain's history as he signed its divorce treaty with the EU, clearing another hurdle before the country exits the bloc on Jan. 31.

It allows Britain to end its decades-long membership of the European Union and leave its closest neighbours and trading partners after several years of domestic acrimony and delays.

"The signing of the withdrawal agreement is a fantastic moment, which finally delivers the result of the 2016 referendum and brings to an end far too many years of argument and division," Johnson said in a statement.

"This signature heralds a new chapter in our nation's history," he added on Twitter, alongside a photo of the occasion.

Johnson signed the agreement in Downing Street, seated in front of two Union Jack flags, with European and British officials who had brought it from Brussels looking on.

EU chiefs Ursula von der Leyen and Charles Michel had already put their names to the treaty overnight at a ceremony held behind closed doors in the early hours of the morning.

It will now return to Brussels, where the original will be kept in EU archives along with other international treaties, while three copies will be dispatched back to London.

On Jan. 29, the text will go to the European Parliament for ratification and on Thursday diplomats from the EU member states will approve the deal in writing.

Then, Jan. 31, Britain spends its last day in the EU before leaving the bloc at 2300 GMT as clocks strike midnight in Brussels.

In another move to prepare Brussels for relations with Britain as an outside power, the European Commission named an ambassador -- veteran diplomat Joao Vale de Almeida -- to...