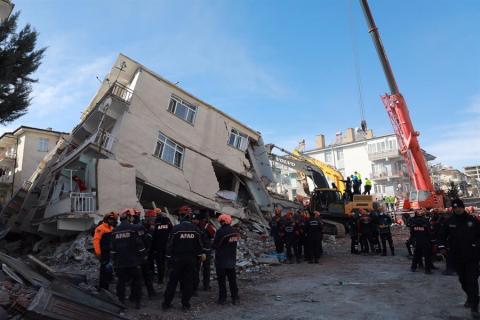 Environment and Urbanization Minister Murat Kurum has said a team of more than 500 personnel under the coordination of Turkey's disaster and emergency agency AFAD began working at a site of the Elazığ earthquake, in eastern Turkey, and that the housing needs of earthquake-affected citizens would be met immediately.

The housing needs of citizens will be met quickly in Elazığ's Sivrice district and Malatya's Doğanyol district, he said, speaking at a press conference on Jan. 26.

The ministries sent aid to governor's offices for relocation, rent assistance, and emergency housing need, Kurum said, noting that they will ensure the urgent transfer of funds to these citizens.

"We are carrying out the damage assessment activities in Elazığ and Malatya rapidly," the minister said. He recalled that they created a crisis desk under the coordination of the Elazığ Governor's Office.

He said that all relevant ministries at the crisis desk are trying to respond in line with the requests and that the teams were directed to the damage determinations quickly, under the coordination of a deputy governor.

Kurum said that citizens can apply to district governor's offices through the offices of neighborhood heads as soon as possible.

"They have to apply and let us know that we can quickly make these damage determinations, determine the condition of our citizens' building, and if they are less damaged or undamaged, let them move to the building according to the situation," he stated.

"In centeral Elazığ and Sivrice district, we detected 31 ruined, 249 seriously damaged, 56 medium damaged and 349 less damaged buildings. We have 12 buildings that need to be demolished immediately," Kurum noted.

"The ministry was discussing these...