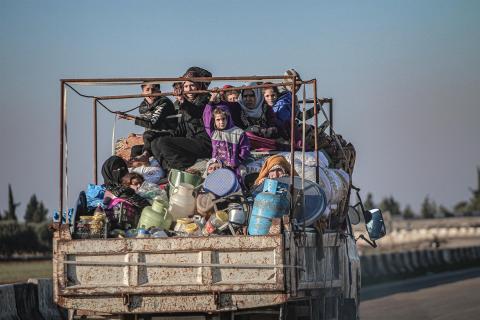 Around 31,600 more civilians have fled their homes in Idlib de-escalation zone in Syria over the last two days due to attacks by the regime and its allies.

According to Syria's Response Coordination Group, the displaced civilians headed to areas near the Turkish border due to the attacks that violate a cease-fire agreement between Turkey and Russia.

As a result of the Assad regime and Russia forces' attacks, 31,000 civilians, consisting of 6,200 families, became homeless in the last three days, Hallaj added.

Approximately 481,000 civilians have been displaced from the settlements of Idlib's southern, southeastern, and Aleppo's western and southern
rural areas since Nov. 2019.

Due to the rising displaced population, the tent camps in Idlib fail to meet the needs of war-weary Syrians as there is not enough space to set up more tents. Thousands of families are currently in dire need of humanitarian assistance.

Some displaced people arrived in tent camps along Turkey's borderline and some fled to areas of Peace Spring and Olive Branch operations which the Turkish army cleared of terrorists.

More than 1 million Syrians have moved near the Turkish border due to intense attacks over the last year.

Since the eruption of the bloody civil war in Syria in 2011, Turkey has taken in some 3.7 million Syrians who fled their country, making it the world's top refugee-hosting country.