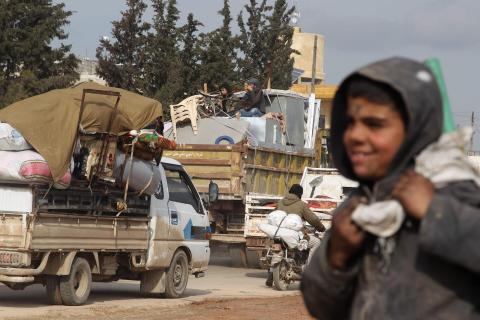 Some 21,000 civilians have fled Syria's northwestern region of Idlib to places near the Turkish border in the last 24 hours, amid heightened bombardments by the Syrian regime and Russia, state-run Anadolu Agency reported on Jan. 27.

The attacks of Bashar al-Assad regime, Russia and Iran-backed terrorist groups in residential areas east and south of Aleppo province continue to displace thousands of Syrians.

The majority of the displaced people arrived at the camps near Turkish border while some others took refugee in the areas cleared of terror elements following Turkey's military operations.

According to the figures Anadolu Agency provided, the number of people displaced from Idlib and Aleppo since November 2019 has mounted to 502,000.

Nevertheless, the Idlib tent camps fail to meet the needs of displaced Syrians because of the increased number of displaced persons. Officials say the camps have neither enough space to set up more tents nor the necessary infrastructure.

Displaced families are in urgent need of shelters, tents, blankets and beds.

Meanwhile, Syrian regime forces were poised on Jan. 27 to soon enter Maaret al-Numan, a town of symbolic and strategic importance that is deserted after months of bombardment, located in the last opposition bastion.

Maaret al-Numan is a strategic prize lying on the M5 highway linking Damascus to Syria's second city Aleppo, a main artery coveted by the regime.

It is also the second biggest city in the...