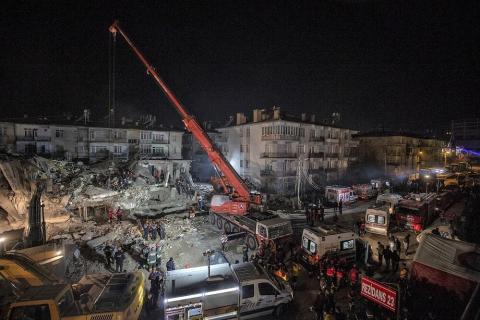 The death toll from a powerful earthquake in eastern Turkey has risen to 38, the country's disaster relief agency said on Jan. 26.

Out of 1,607 injured people, 1,515 have been discharged from the hospital, while 45 people who were trapped under the debris of houses and buildings were rescued, according to the Disaster and Emergency Management Presidency (AFAD).

A total of 844 aftershocks were felt, it added.

AFAD said rescue work continues in the region with more than 3,800 personnel, hundreds of vehicles and 22 sniffer dogs.

"We have borne many earthquakes but the nation has risen above them patiently," said Erdoğan, asking citizens to exercise strength in their weakest hour.

Erdoğan also stressed that the state has been running to the needs of its citizens with all its institutions and facilities since the earthquake.
"Turkey is healing the wounds of this great disaster in unity, togetherness and solidarity," he told reporters on Jan. 26 before departing for Algeria.
Reminding that the interior, health, environment, and urbanization ministers immediately went to the region to supervise the works, Erdoğan said, "All kinds of personnel, tools, equipment, and equipment needed were delivered to the earthquake area in a very short time. All necessary precautions regarding the food and the maintenance of our citizens were taken rapidly."

Condolences continued to pour in to Turkey after at least...