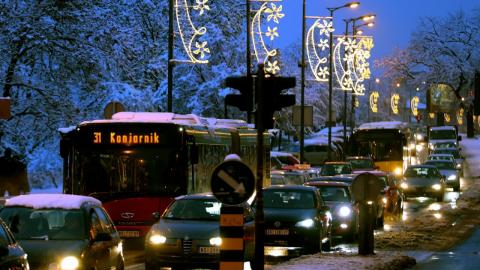 Amid complaints that Serbia is importing too many ancient, high-polluting cars, the government is reportedly considering banning the further import of so-called Euro 3 cars - passenger vehicles that meet the EU emissions standards set for 2000 to 2005.

The daily Vecernje Novosti daily wrote on Monday that while the state already intended to do more to promote eco-friendly cars, recent events when many Serbian cities were placed at the top of the list of the most polluted in the world had put more pressure on them.

"Most probably starting from June, a ban on imports of Euro 3 cars will enter into force," the report on Monday said, quoting several sources.

President Aleksandar Vucic said on January 17 in an interview for the public broadcaster RTS that imports of Euro 3 cars should be stopped.

"Many people drive cars with Euro 3 engines whose further import should be banned. Such vehicles will not be confiscated from people who already have them [however]," Vucic said. About 20 per cent of the total pollution in Serbia comes from road traffic, he added.

The head of the Serbian Association of Importers of Vehicles and Parts, Milos Petrovic, confirmed to Vecernje Novosti on Monday that Serbia might ban Euro 3 cars from June.

"Nobody is against the import of second-hand cars. We only ask for them to be technically correct, to have catalysts and other devices, and not to import ancient cars," Petrovic said.

Serbian Environment Minister Goran Trivan announced several times last year that the government was thinking of banning Euro 3 imports, suggesting that 2021 was a realistic option for this.

Serbia is the only country in the region that has not banned the import of cars that meet Euro 3 emissions...