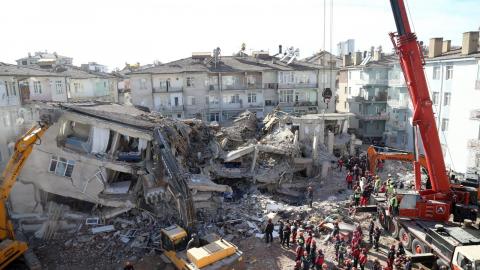 Turkish authorities said victims of the weekend quake that hit eastern Anatolia were being temporarily accommodated in sports centres, schools, tent camps and religious facilities and will soon be transferred to a proper camp, which will be built soon.

At least 39 people were killed and nearly 2,000 people injured by the powerful quake that hit the eastern city of Elazig on Friday night.

The magnitude 6.8 quake, centred on the Sivrice municipality, caused building to collapse and created panic on the streets.

The tremor was felt by surrounding cities and towns and even in other countries, including Iraq, Iran, Syria and Israel.

Numerous aftershock quakes followed the main one and added to the panic and the damage.

The Turkish Disaster and Emergency Management Presidency, AFAD, said at least 45 people have been rescued so far and rescue operations are continuing to reach others who remain trapped in fallen rubble and masonry.

The AFAD said 76 buildings had collapsed and another 688 were damaged. Some 12 buildings will be demolished immediately.

The centre of the quake lies some 550km east of the capital Ankara and 1,200km east of Istanbul. Remote and sparsely populated, winter conditions are also hampering rescue work, so the exact scale of the damage will only be known later.

Following the quake, Turkish leaders cancelled their plans and visited the affected area.

"We are with our nation. All state institutions are taking the necessary measures," President Recep Tayyip Erdogan said on his visit to Elazig.

A crisis desk, including the interior and health ministers, city governors and other officials, has been set up to manage...

Ankara in talks with four countries for swap deals