Zisis returns to AEK to lead it to triumph at Peristeri 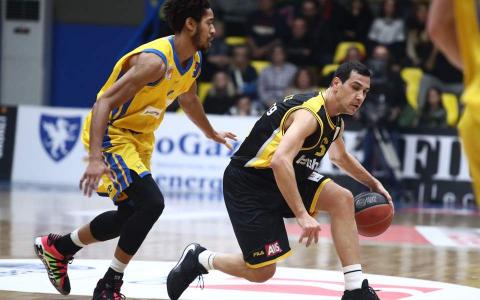 Greece legend Nikos Zisis returned to the local league on Saturday. He helped AEK beat rival Peristeri away and consolidate itself on the second spot of the Basket League.

Zisis, a gold medallist at the 2005 Eurobasket, has decided to end his career at the professional club where he made his name before spending a decade and a half abroad.

On Saturday he scored 18 points and distributed five assists to lead AEK to a 77-73 victory at Peristeri. The Yellow are now two points ahead of both Peristeri and Promitheas, that went down 73-70 to Kolossos on Rhodes.

Leader Panathinaikos scored a record 21 triples to dismantle visiting PAOK 117-79 on Monday and stay two points clear at the top of the table.

Ionikos recorded an important home win over Aris with a 72-65 score on Sunday to move up to eighth, while Aris is once again tied at the foot of the table with...