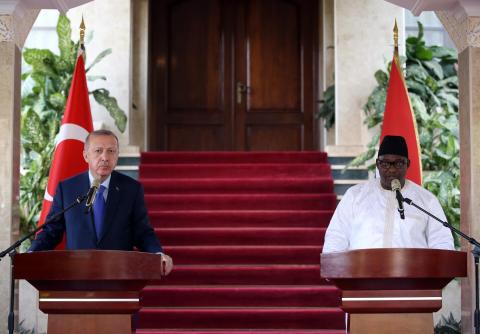 Forces loyal to Libyan warlord Khalifa Haftar are not concerned about peace or a ceasefire in Libya, Turkey's president said on Jan. 27.

Speaking at a joint news conference in Gambia with his Gambian counterpart Adama Barrow, President Recep Tayyip Erdoğan referred to a statement on Jan. 26 by Ahmed Al-Mismari, the spokesman for Haftar's forces.

Erdoğan said Mismari stated that they did not go to Berlin and Moscow for a solution, but to "explain their alleged rightful cause. This statement reflects Haftar's true intent."

"We hope that those who came to the Berlin summit on Jan. 19 also heard those comments and will determine their attitude accordingly," Erdoğan said, referring to Haftar's uncompromising attitude.

"Haftar himself especially and those with him are legionaries and supported primarily by the Abu Dhabi administration [in the United Arab Emirates]. Money is given from there, and now also more than 5,000 soldiers were deployed from Sudan to here," he added.

On Jan. 12, parties in Libya announced a ceasefire in response to a joint call by the leaders of Turkey and Russia. But two days later in Russia, talks for a permanent ceasefire ended without an agreement after Haftar left Moscow without signing the deal.

A week later, Haftar accepted terms in Berlin to designate members to a U.N.-proposed military commission with five members from each side to monitor the implementation of the ceasefire.

Since the ouster of late ruler Muammar Gaddafi in 2011, two seats of power have emerged in Libya: one in eastern Libya supported mainly by Egypt and the United Arab Emirates and another in Tripoli, which enjoys U.N. and international recognition.

Speaking to reporters en route to...

Turkey shuts Greece, Bulgaria land borders to passengers
MAE:Romanians at Austria's border with Hungary can cross Hungarian territory according to the instructions of authorities

Egypt Stops all International Flights to and from the Country, Charter Flights are Included