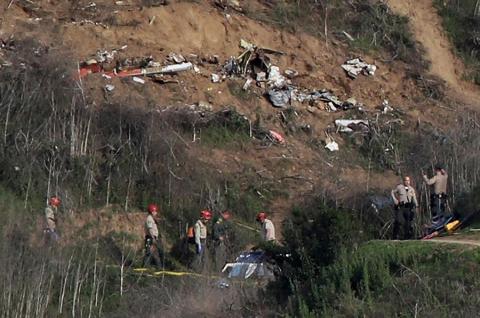 Friends, colleagues and fans mourned Kobe Bryant on Jan. 27 as federal investigators sifted through the wreckage of the helicopter crash that killed the basketball legend and eight other people, hoping to find clues to what caused the accident that stunned the world.

Bryant, 41, was traveling on Jan. 26 with his 13-year-old daughter Gianna and seven other passengers and crew when the Sikorsky S-76 slammed into a rugged hillside in thick fog in Calabasas, northwest of LA. There were no survivors.

A five-time NBA champion for his only team, the LA Lakers, and a double Olympic gold medalist, Bryant was widely regarded as one of the greatest basketball players in history.

He was traveling on his private helicopter from Orange County, where he lived, to his Mamba Sports Academy in Thousand Oaks where his daughter was set to play.

Jennifer Homendy, a member of the National Transportation Safety Board, told a press conference that investigators would remain at the site of the crash throughout the week to collect evidence.

"It was a pretty devastating accident scene," she said, adding that the wreckage was strewn across about 600 feet (180 meters).

"We will be here about five days on scene to collect perishable evidence," she said. "We are not here to determine the cause of the accident. We will not determine that on scene."

Homendy said the aircraft did not have a black box, which was not required on that type of helicopter.

Los Angeles County Sheriff Alex Villanueva told reporters it would "take a while" to recover the remains of the victims because of the force of the crash and the rugged terrain.

He added that given the number of people trying to access the site unlawfully,...

Apple to miss revenue target due to coronavirus

Istanbul's haunted house up for sale