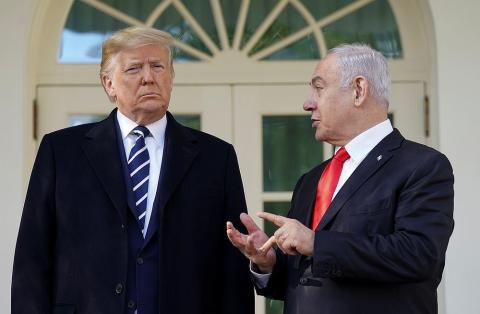 U.S. President Donald Trump said he will announce his long-delayed Middle East peace proposal and that he believes Palestinians will eventually go along with it despite their refusal to engage on the subject.

Sitting down with Israeli Prime Minister Benjamin Netanyahu in the Oval Office, Trump said his plan "makes a lot of sense for everybody." Of the Palestinians, Trump said, "It's something they should want," but he declined to say how it would be good for them.

Trump will deliver joint remarks with Netanyahu at the White House on Jan. 28 to outline his plan, which U.S. officials intend to generate momentum toward resolving one of the world's most intractable conflicts.

Palestinians fear the plan will dash their hopes for an independent state in the West Bank, Gaza Strip and East Jerusalem, areas Israel captured in the 1967 Middle East war.

"They probably won't want it initially," Trump said. "But I think in the end they will... It's very good for them. In fact it's overly good to them. So we'll see what happens. Now without them, we don't do the deal and that's OK."

Trump added, "We think there's a very good chance that they're going to want this."

After his session with Netanyahu, Trump met separately with Benny Gantz, the head of Israel's centrist Blue and White Party, who is the right-wing prime minister's rival in a March 2 election.

While Trump allowed reporters and cameras in for his meeting with Netanyahu, the session with Gantz was held without the presence of the news media.

"The president's peace plan is a significant and historic milestone indeed," Gantz told reporters later. "Immediately after the elections, I will work toward implementing it from within a stable, functioning Israeli government...