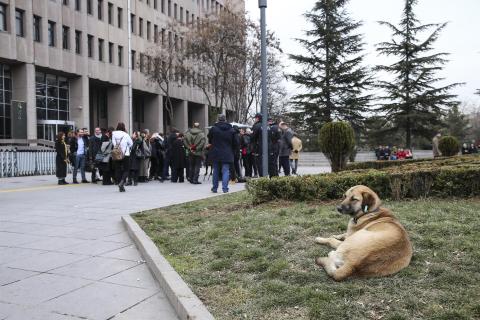 Three men on Jan. 27 were sentenced to 10 years in prison apiece for poisoning stray dogs in capital Ankara, according to state-run Anadolu Agency.

The Heavy Penal Court No. 5 in Ankara also imposed a punitive fine of 15,000 Turkish Liras (nearly $2,524) on each defendant, Anadolu Agency cited anonymous sources as saying.

The decision was welcomed by animal lovers watching the trial.

The indictment said the defendants killed 16 dogs in Ankara with chicken meat dipped in pesticide.

The legal status of animals has been a much-debated topic in Turkey.

Amid mounting pressure from the public, the Turkish government had hastily announced a new ministerial bill for animal rights, which was sent to parliament in April 2018, and vowed to prioritize it ahead of the June 24 elections last year. One year on, the legislation is still yet to be adopted.

Those who dare to torture animals will receive four months to three years in prison, according to the new bill.

If the perpetrator violates the freedoms of multiple animals in the same instance, his or her sentence will be increased by one-and-a-half times, rising from six months to four-and-a-half years in jail, according to the draft.