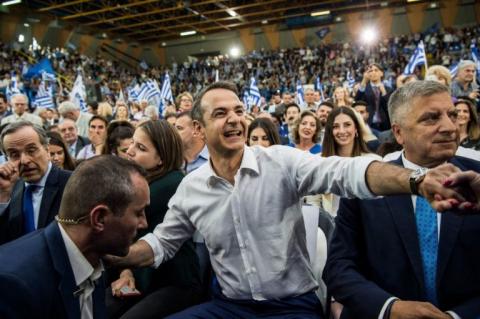 The ruling party and the prime minister personally during the electoral campaign and once in office fervently declared their faith in the rule of law and the enforcement of laws.

The government found many cases in which the law was ignored and the rule of law was not respected. It also proclaimed that it cannot be blackmailed and that nobody is above the law.

The government's word of honour and faith in the rule of law did not endure the test of time.

Early on it caved in to the blackmail and demands of particular individuals who demonstrably violated the law which prohibits the ownership of multiple football teams because that circumvents the terms and rules that ensure a healthy and truly competitive championship.

Right after the issuance of a well-documented report of the Committee on Professional Athletics (EEA) which demonstrated the crime of multiple ownership in the case of PAOK F.C. and Xanthi F.C. the competent administrators of the two teams flouted the norm and could not deny or dispute the truth of the charges and of the buyout which they had set up through middlemen.

They went as far as to maintain that the matter will have an impact on national unity and cohesion.

They invoked Turkish threats and threatened that the country would be destabilised if the government approved the EEA report and imposed the appropriate penalty of a downgrade of the two teams to the second category.

Needless to say, ruling party MPs were personally pressurised and the political leadership was confronted with verbal attacks and curses from circles which in previous years acted on the margins of legality.

They enjoyed favourable arrangements for the repayment of debts, the cancellation of fines, and acquittals as regards a host...