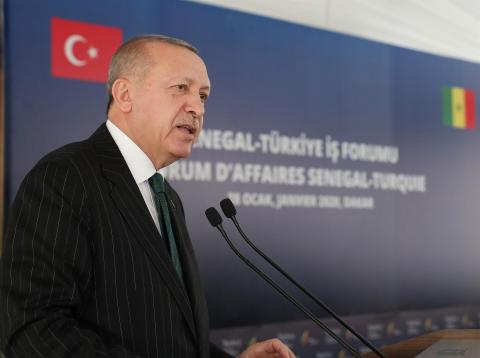 Turkey's president on Jan. 28 said Libyan warlord Khalifa Haftar has no official recognition either in the war-weary country or the international community.

"Haftar is a mercenary, a paid soldier," President Recep Tayyip Erdoğan told a press conference in Senegal with his counterpart Macky Sall. He added that Haftar took refuge in the U.S. in the 1990s after he betrayed toppled leader Muammar Gaddafi.

He went on to say that Libyan Prime Minister Fayez al-Sarraj of the U.N.-recognized Government of National Accord (GNA) is recognized by the U.N. Security Council and should not be grouped in with the warlord Haftar.

Since the ouster of late ruler Muammar Gaddafi in 2011, two seats of power have emerged in Libya: Haftar's in eastern Libya, supported mainly by Egypt and the UAE, and the GNA in Tripoli.

Haftar has not sought to reach a political agreement to resolve the Libya dispute and he enjoys the support of Russian paramilitaries the Wagner Group, he said, calling them "mercenaries."

Erdoğan said claims the crisis in Libya will be quickly resolved are misguided, decrying how Haftar did not even attend peace meetings held by regional and international actors in Tunisia, Moscow, and Germany, where he "hid in a hotel room."

It would be better if the crisis in Libya moved towards a political process instead of a military one and Libyans determine their own future, he said.

On Turkey's ties with Senegal, Erdoğan said after they successfully met a previous trade goal of $400 million, now the countries have set a trade volume goal of a $1 billion, and both...