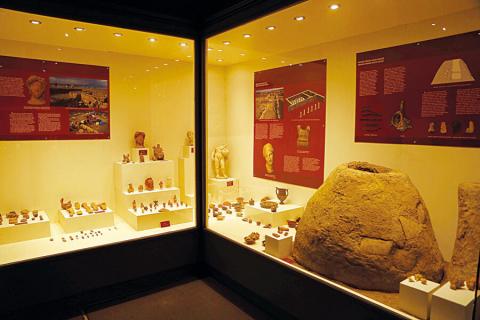 They were a group of Indo-European tribes inhabiting a large area in southeastern Europe. They spoke the Thracian language - a scarcely attested branch of the Indo-European language family.

Famous historic figure Spartacus was a Thracian enslaved by Rome who led a large slave uprising in southern Italy in 73-71 B.C. and defeated several Roman legions in what is known as the Third Servile War.

During the excavations in the ancient cities of Heraion-Teichos (City of Hera) in Süleymanpaşa, Çavuşköy in Malkara and Perinthos in Marmaraereğlisi, many works belonging to the Thracians have been so far discovered. Including the tomb of Kersopleptes, one of the Thracian kings, and artifacts such as jewelry, coins, weapons and reliefs, which have been unearthed in Tekirdağ, take visitors of the Tekirdağ Archeology and Ethnography Museum on a journey to history.

Metal containers, ceramics, Turkish bath sets, handicrafts, towels, silver jewelry, firearm and cutting guns used in the Ottoman and Republican periods are among the works exhibited in the museum.

Speaking to the state-run Anadolu Agency, the museum's art history expert Levşa Erdem said that the works exhibited in the museum testify to the past.

"At the entrance of our museum, we have a stone artifacts room and a garden display. Here, there are reliefs, sarcophagi and tombstones from the...