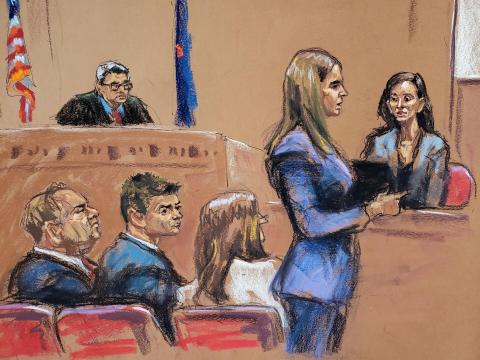 Weinstein, 67, has pleaded not guilty to sexually assaulting Haleyi and Jessica Mann. Since 2017, more than 80 women, including many famous actresses, have accused Weinstein of sexual misconduct.

The accusations fueled the #MeToo movement, in which women have accused powerful men in business, entertainment, media and politics of sexual misconduct. Weinstein's trial is widely seen as a key moment for the movement.

Weinstein, who reshaped the independent film industry with critically acclaimed pictures such as "The English Patient" and "Shakespeare in Love," has denied the allegations and said any sexual encounters were consensual.

Haleyi, who worked as a production assistant on a Weinstein television show, told jurors on Jan. 27 that Weinstein invited her to his Manhattan home in July 2006 and attacked her, backing her into a bedroom and forcing oral sex on her.

Entin said on Jan. 28 that she and Haleyi shared an apartment in 2006.

She said that one evening Haleyi appeared unusually nervous, and told her Weinstein had assaulted her in his home.

"She said 'I'm on my period' and he said 'I don't care,' at which point he threw her down, pulled down her underwear, pulled out her tampon and went down on her while she was saying 'no,'" Entin said.

Entin testified that she told Haleyi her experience sounded like rape...