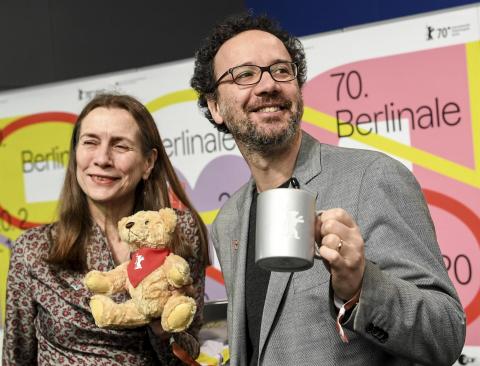 Films starring Johnny Depp and Sigourney Weaver will be among those premiering at Berlin's film festival next month, organizers said, as they defended a competition line-up with fewer female directors than last year.

The 11-day Berlinale celebrates its 70th anniversary. The upcoming edition will also be the festival's first under new directors Carlo Chatrian and Mariette Rissenbeek, after former boss Dieter Kosslick ended an 18-year spell at the helm last year.

Amid furious debate in Hollywood about the dominance of white winners at award shows, the duo said Jan. 29 they wanted the Berlin festival to "embrace diversity."

"The history of the Berlinale is one of awareness... of all the differences that exist not just in the film business, but in life," said Chatrian.

Last year, Kosslick signed the Berlinale up to a so-called "50/50" pledge to achieve gender parity by 2020.

Yet of the 18 films that will vie for the Golden and Silver Bear prizes, only six are directed by women, one fewer than in 2019.

They include Sally Potter's "The Roads Not Taken", starring Spanish star Javier Bardem.

Defending the line-up, Rissenbeek pointed out that "the artistic directors of the festival sections are generally women."

Major female stars at this year's event include Oscar-crowned British actress Helen Mirren, set to be honored with the Berlinale's lifetime achievement award.

Fellow British Oscar winner Jeremy Irons will head the international jury, which organizers said would be announced in the coming weeks.

The festival will open on Feb. 20 with Philippe Falardeau's "My Salinger Year," a Canadian-Irish production starring Sigourney Weaver and based on the memoirs of New York author Joanna Rakoff...