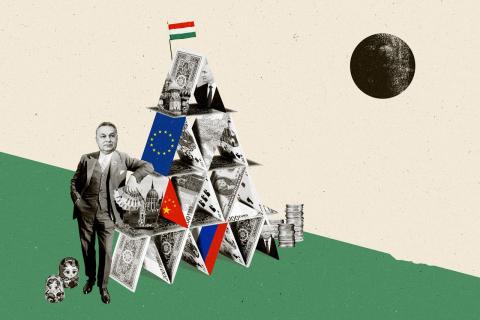 A century since the Treaty of Trianon dramatically shrank the size of the Hungarian state and stranded millions of Hungarians beyond its borders, Orban is pouring money into ethnic Hungarian communities in neighbouring states, issuing passports and picking up voters and political leverage for the ruling Fidesz party.

The largesse, however, has come at a price for democracy, according to a BIRN investigation in Slovenia, Serbia and Romania, where Hungarian spending shot up from 40 million euros in 2015 to 330 million in 2018 and amounted to more than three quarters of a billion over the four-year period.

In these countries, local proxies beholden to Budapest now wield a worrying degree of influence over media, culture and development funds, imitating Orban's own 'illiberal democracy'.

Investigation In a Hungarian Corner of Slovenia, a Homegrown Orban From the marginalisation of dissenters to control of the media, Viktor Orban's Hungary is being replicated in miniature in a tiny patch of neighbouring Slovenia inhabited by ethnic Hungarians.Investigation For Serbia's Hungarians, More Forints and a Tamed Media Investigation Living like in Hungary: Orban Bankrolling Romania 'Ethnic Parallelism'

Akos Keller Alant is an award-winning investigative journalist and a news editor at Hungarian magazine Magyar Narancs. He mostly reports on politics, economics and corruption, and has interviewed leading Hungarian and international politicians for his work.

This article has been produced as part of the Resonant Voices Initiative in the EU, funded by the European Union's Internal Security Fund - Police. The content of this story is the sole responsibility of BIRN and can in no way be taken to reflect the...