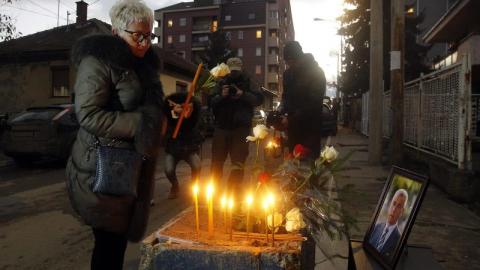 Arsovic is charged, as the only person present in Ivanovic's political party's office in the Kosovo town of Mitrovica when he was shot dead outside the building in January 2018, of turning off the power so the closed-circuit television cameras did not work when he was murdered.

"This allowed the suspects not to be recorded by cameras when they committed the murder… while immediately after the murder, [she] activated the cameras at the [party] offices," the indictment alleges.

Arsovic has repeatedly denied the accusations.

Radoicic and Veselinovic, both prominent Kosovo Serbs, are accused of being the group's leaders. They have both fled to Serbia to avoid arrest and have denied wrongdoing.

Spasojevic and Basara were Kosovo police officers before they were arrested.

The amended indictment still does not name the person or persons who carried out the gun attack on Ivanovic.

Arsovic had been charged with involvement in the killing of Ivanovic in the original indictment, but not as part of the criminal group.

She had been due to go on trial alongside Spasojevic, Rosic, Pasara and two other former Kosovo Serb policemen, Dragisa Markovic and Zarko Jovanovic, at the end of December.

But the first hearing was postponed until February to give defence lawyers time to study the amended indictment.