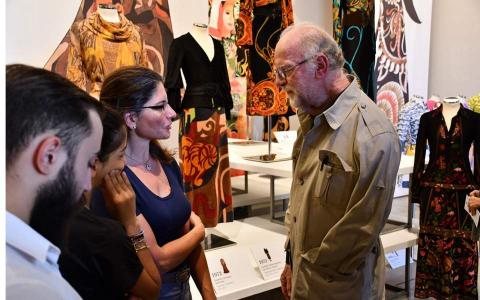 Pioneering Greek fashion designer Yannis Tseklenis died on Wednesday at the age of 82, the Peloponnesian Folklore Foundation, to which he donated his work, announced on Thursday. Tseklenis, who is credited with putting Greek fashion on the map in the 1970s with his bold prints and comfortable silhouettes, started out in the mid-1960s as a fabric designer. He retired in 1991 after branching out into various related fields, including interior design, and expanded his business across the world, from the United States to Iran. He is seen here talking to a group of visitors at a retrospective of his work in the Peloponnesian town of Nafplio in November 2018. [Evangelos Bougiotis/ANA-MPA]

Painter Vladimir Zamfirescu has died at 84