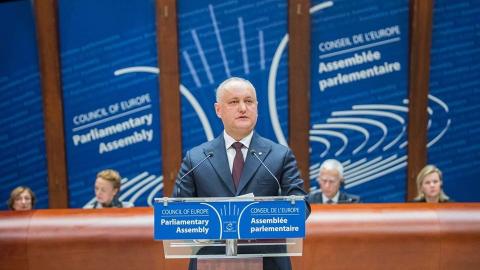 The Romanian Academy of Sciences on Thursday dismissed claims put forward by the President of Moldova in Strasbourg that his country has its own language.

It said the theme of a "Moldovan language" promoted by President Igor Dodon at a speech to the Parliamentary Assembly of the Council of Europe on Wednesday was a revival of Soviet-era tropes.

Now an independent state, Moldova formed part of Romania between the two world wars and many Romanians still insist it is ethnically and linguistically Romanian.

"To promote the idea of a 'Moldovan' language, distinct from the Romanian one, is not only a distortion of cultural reality and identity documented in all linguistic, historical and literary syntheses but also an ideological manipulation that the international community will never accept it," the Romanian academy said in a press release.

The academy went on to note that Moldova was hardly unusual in being a separate state without its own language, referencing similar situations in Austria and Switzerland, both of which speak German, and in Belgium, where francophone Walloons speak French.

"Switzerland is a state, but there is no Swiss language invented for political reasons. Austria has a nationality that is old and recognised, but the language studied in Austrian schools is not Austrian but German. Neither is the French studied in Belgium called Belgian," it said.

In Moldova itself, whether the language of the majority of the population is Moldovan or Romanian remains a moot point.

Article 13 of the constitution says the official language is Moldovan. But, on December 5, 2013, the Constitutional Court ruled that the provision in the Declaration of Independence, regarding the Romanian language as the state language, should...

Bulgaria Closed its Borders to non-EU Countries, some Countries from the EU and Switzerland