80 schools in east shut down due to damage: Minister 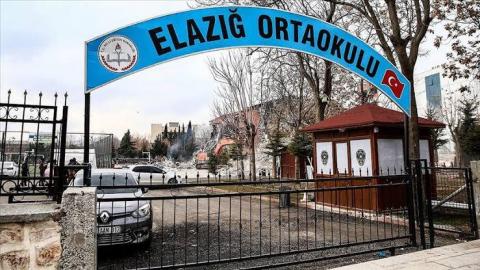 Eighty schools in the country's east damaged during an earthquake on Jan. 25 have been closed and the buildings will be demolished, Turkish Education Minister Ziya Selçuk has said.
"All schools in the earthquake-region were controlled and the decision to demolish 80 of them has been taken," Selçuk said on Feb. 2 in an interview with Kanal 7.
"Of these 80 schools, 32 are located in Elazığ, 27 are in Malatya, 14 in Adıyaman and seven in Diyarbakır," he added.
Selçuk emphasized that with the contribution of philanthropists and the resources allocated from the national budget, they will meet all the needs of the schools in a very short time.
The 6.8-magnitude quake shook the eastern Elazığ province and other neighboring provinces on Jan. 24, killing 41 people and injuring 1,600 others, according to Disaster and Emergency Management Presidency (AFAD) data.
The epicenter of the earthquake was in Elazığ's Sivrice district and tremors were also felt in neighboring countries, including Syria and Georgia.
Earthquakes continued to shake both eastern and western Turkey over the weekend.
Two earthquakes of 4.5 and 4.2-magnitude jolted Elazığ early on Feb. 1, according to AFAD.
The earthquakes stuck 31 minutes apart at 2:32 a.m. local time and 3:03 a.m. at a depth of about seven kilometers.
"There has been no damage and no loss," said AFAD.
A 4.6-magnitude earthquake shook Turkey's western province of Manisa early on Feb. 2.
The earthquake occurred in the Akhisar district at 3:23 a.m. at a depth of six kilometers, said AFAD. A series of aftershocks jolted the area following the earthquake, it added.
Education Minister Selçuk also answered questions about the country's education system.
When asked about mid-education year...