Djokovic is immortal in Australia! 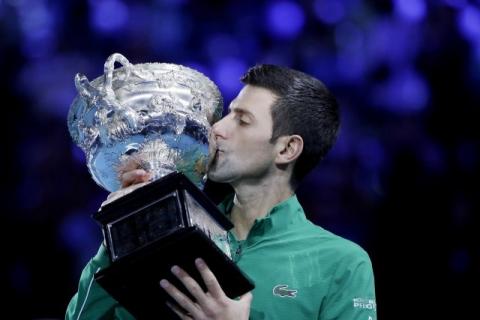 Djokovic went through a dramatic match and, after losing the third set, fought back, beating his Austrian opponent in five sets -- 6-4, 4-6, 2-6, 6-3, 6-4.
Djokovic, who remains unbeaten in finals on Rod Laver Arena, now has 17 slam titles, only three short of record holder Roger Federer, and will reclaim the world No 1 ranking from Nadal on Monday.
Novak confirmed his immortality in Australia by the fact that he never lost the finals, and despite the fact that he seemed on the edge of defeat after three sets played, nevertheless, he was able to return and triumph in great style.
He also increased the advantage over the Austrian by 7-4 in head to head matches, and in the number of Slams, with his 17th Grand Slam title, Novak came closer to Rafa, who won 19, and Roger, who won 20 grand slams.

Novak addressed the audience saying: "Congratulations to Dominic for an amazing tournament. It wasn't to be tonight. Tough luck. You were very close to win it, you have a lot of time in your career to get one of the Grand Slam trophies. More than one".
He added: "I would like to thank my team, my family, my brother is here - thank you for coming all the way to Australia for some quality brother time and hopefully you enjoyed it".
But then after thanking his family, and in particular his brother for making the trip down under to see him, Djokovic's mind turned to tragedy.
In particular, the devastating bushfires that have ravaged Australia since December, as well as the death of his close friend Kobe Bryant.
"You know, there was some devastating things that started 2020," Djokovic said.
"With huge bushfires here in Australia. Conflicts some parts...

Bogdan Bogdanović in a new team!

Brnabić: We will close schools and kindergartens under one condition