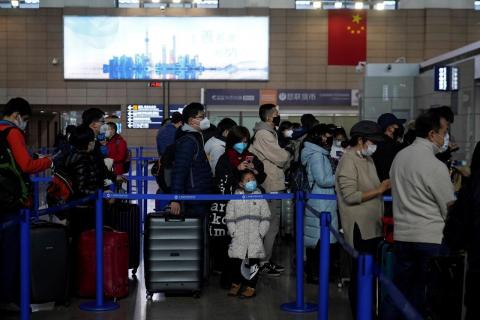 Turkey has decided to stop all flights from China until the end of February, the health minister has said, as part of measures taken against the coronavirus threat.

"Starting from Wednesday [Feb. 5], we have decided to stop all the flights from China," Health Minister Fahrettin Koca told reporters at a press conference on Feb. 3 after the meeting of the Science Council. Turkey had already reduced the number of Turkish Airlines flights to China after the coronavirus outbreak.

The minister informed that the number of the flights from and to China has significantly dropped because of health concerns. But all the passengers coming from far eastern countries, like Japan, Taiwan, Thailand, Hong Kong, Singapore, South Korea and Malaysia to Turkish airports will be screened by thermal cameras in order to avoid the spread of the coronavirus into Turkey, he added.

"This will be started from tomorrow [Feb. 4], he stated.

The minister provided information about ongoing medical tests done on 62 people who have been quarantined after being evacuated from China's Wuhan region. Tests have proven that none of these persons have coronavirus, the minister said, adding that these persons will continue to be under quarantine for 14 days in line with the virus' incubation period.

"We are not treating them as patients. They are in very good condition and we are meeting their demands," he stated.

Meanwhile, Turkish Airlines has decided to extend the suspension of its flights to China, a senior spokesman said on Feb. 3.

The national flag carrier suspended flights to the capital Beijing as well as Guangzhou, Shanghai, and Xian until the end of February, Yahya Üstün, Turkish Airlines' senior vice president for...