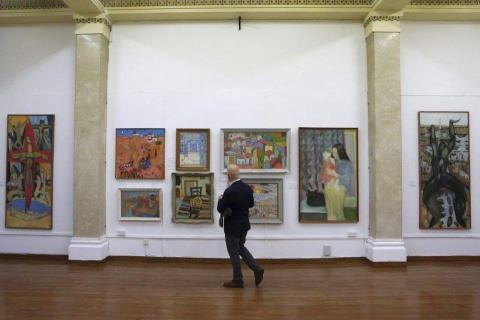 It took more than 45 years, but 219 paintings thought lost or stolen - artwork that includes some of the most significant works produced by Greek Cypriot artists - have gone on display.

One work by artist George P. Georghiou has been hailed as one of Cyprus' "most iconic paintings."

The oil-on-plywood painting encapsulates the Greek Cypriots' armed uprising against British colonial rule during the latter half of the 1950s that culminated in the Mediterranean island's independence.

"This is some of the most prized art in Cyprus and Greece," said Yiannis Toumazis, a senior Greek Cypriot official on a committee trying to foster trust through culture between the divided island's Greek Cypriot and Turkish Cypriot communities.

Officials say the paintings are of incalculable artistic value but some could carry price tags well into six figures.