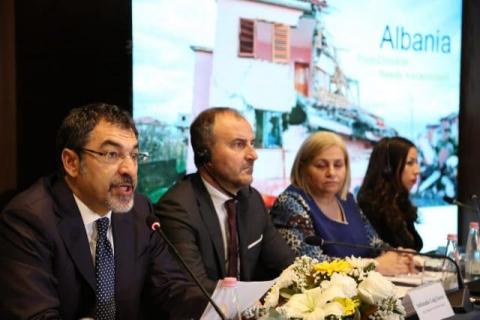 Minister of Agriculture Bledi Cuci (left), and EU ambassador in Tirana Luigi Soreca at the presentation of the assessment of November 2019 earthquake damage in Tirana on February 5, 2020. Photo: Gent Shkullaku/LSA

It estimated the cost of damage to both public and private properties at 844 million euros and the cost of their reconstruction at 1.07 billion euro.

About 800 million euros are needed to rebuild homes while the rest of the money is needed to repair damaged infrastructure, such as schools and health centres.

Minister of Agriculture Bledi Cuci said some 11,490 homes were destroyed or damaged in the quake while more than 83,000 need repairs. Some 321 schools and kindergartens were also damaged, at a total cost of 72 million euros.

The government is hoping the donor conference will help cover some of the costs of the earthquake that hit Albania last November. About 51 people were killed as buildings collapsed. The 6.3 Magnitude quake was the strongest to hit Albania in the last 40 years.