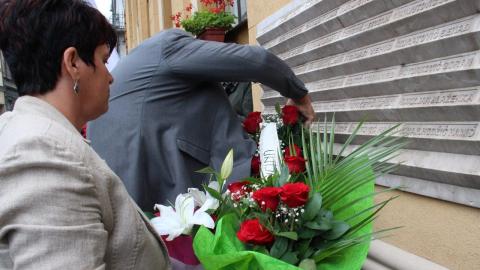 Families of victims, Bosnian politicians and ordinary Sarajevans gathered to lay flowers and pay tributes on Wednesday at the site of the Markale market shelling on the 26th anniversary of the deadly attack during the siege of Sarajevo by Bosnian Serb forces.

Sead Pesto, who provided help for people who were wounded by the blast, said that it was one of the most difficult days in his life.

"I was in town that day and I heard a shell being fired from the surrounding hills. After a minute or two, screams could be heard, and I arrived to the Markale market and I was transfixed by the horrific scene," Pesto told BIRN.

"At one point, I wanted to lift a [wounded] man up onto a truck. His torso stayed in my hands and his legs fell over on the other side. The man had literally been cut in half," he recalled.

Former Bosnian Serb political leader Radovan Karadzic was also convicted of terrorising the population of Sarajevo through a long-running campaign of shelling and sniper fire during the siege. Karadzic was jailed for life for these and other crimes.

However some witnesses at the trials of Karadzic and other Bosnian Serb war crimes defendants claimed that Markale was not shelled from Bosnian Serb Army positions, alleging that the attack was staged to attract sympathy from the international community.

Senida Karovic, president of the Union of Civilian War Victims of Sarajevo Canton, said that because court verdicts like the...