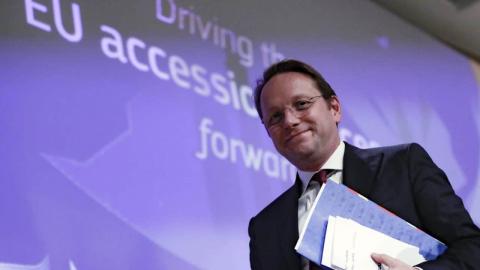 Balkan EU hopefuls on Wednesday welcomed the unveiling of a new proposed methodology for European enlargement on Wednesday in Brussels by Olivér Várhelyi.

The Enlargement Commissioner said that the revised accession process needed to be more credible, with a stronger political steer, more dynamic and more predictable.

"While we are strengthening and improving the process, the goal remains accession and full EU membership of the Western Balkan countries," Várhelyi said in Brussels.

One key novelty in the revised methodology is that the current negotiating chapters will in future be grouped into six thematic clusters: fundamentals; internal market; competitiveness and inclusive growth; green agenda and sustainable connectivity; resources, agriculture and cohesion; and external relations.

"I see this as a great opportunity", Várhelyi said, because talks on each cluster will now be open as a whole - after fulfilling the opening benchmarks - rather than on an individual chapter basis. "This will bring dynamism to the negotiations," he predicted.

Negotiations on the so-called fundamentals - which includes the rule of law, democratic institutions and public administration as well as the economy - will be opened first and closed last.

They will determine the overall pace of negotiations, the Commissioner said, adding that they also plan to impose a limited frame time for the closure of each chapter, preferably one year from since it opened.

The Commission started working on a revised methodology largely on the insistence of France and some other member states.

This happened after, at the October European Council, amid much debate, France sunk North Macedonia's and Albania's hopes of getting a start date for their respective...