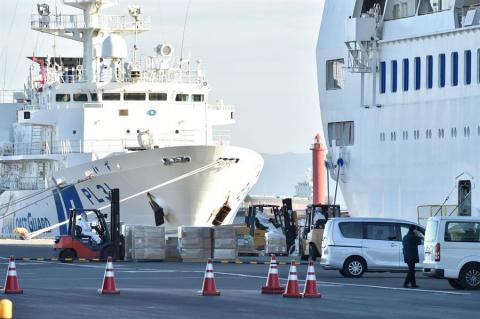 Ten more people on a quarantined cruise liner in a Japanese port have tested positive for coronavirus, officials said on Feb. 6, as the virus death toll in mainland China hit 563, with almost 3,000 new cases reported.

About 3,700 people on Carnival's Diamond Princess are facing at least two weeks quarantine on the ship, which has 20 virus cases and testing is continuing. Japan now has 40 virus cases.

"We are hopeful that the U.S. government will be sending transport for the Americans on board," Gay Courter, a 75-year-old American novelist aboard the ship said.

"It's better for us to travel while healthy and also if we get sick to be treated in American hospitals."

In Hong Kong a cruise ship with 3,600 passengers and crew was quarantined for a second day on Feb. 6 pending testing after three positive cases onboard.

Authorities said 33 crew members on the World Dream had developed respiratory tract infection symptoms and three had been sent to a hospital for isolation and management after developing fevers.

All but one of the 33 tested negative for the disease, with the remaining test pending, the city's health department said in a statement late on Feb. 5.

Taiwan's health authority banned all international cruise ships from docking at the island from Feb. 6.

Another hotspot emerged with at least three people contracting the disease after attending a mid-January company meeting held with 94 overseas staff, including one from Wuhan, at the Grand Hyatt hotel in Singapore.

Authorities have not revealed the name of the company, but the World Health Organization said it was investigating.

The case provided more evidence the virus is spreading through human-to-human contact outside China,...