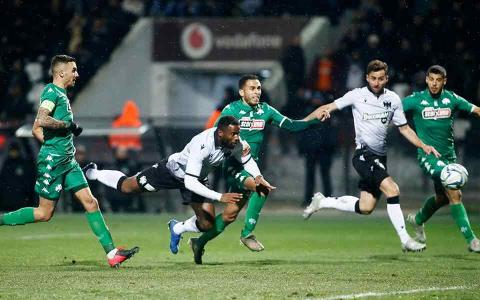 PAOK defeated Panathinaikos 2-0 in controversial fashion in Thessaloniki on Wednesday to take a significant lead in the most important pairing of the Greek Cup quarterfinals, while Olympiakos, AEK and Atromitos also got the edge from the week's first-leg games.

Three days after the league loss to Panathinaikos, PAOK beat the Greens at Toumba by the same score on Wednesday and is looking good ahead of next Wednesday's return game at the Olympic Stadium of Athens.

However the Athens giant has grave complaints from the Swiss referee for the penalty awarded to PAOK on the 32nd minute, converted by Adelino Vieirinha, and another that the Greens were denied for an apparent Vieirinha handball late in the game. In between Fernando Varela (pictured) headed in the second goal for the holder.

On Tuesday Olympiakos shared a 0-0 draw with host Lamia having field a number of...