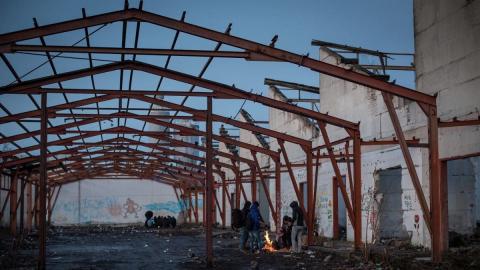 Serbia has ordered three volunteers from a humanitarian NGO called No Name Kitchen, NNK, to leave the country after an altercation at an abandoned factory in Sid, where they confronted members of a nationalist association called Sokoli (The Falcons).

The foreign volunteers said the Sokoli members were destroying the belongings of migrants living in the abandoned factory, but the Sokoli insisted they were only cleaning up the area around the building and were engaged to do so by the local municipality.

A misdemeanours court in the town of Sremska Mitrovica found two volunteers, Adalberto Parenti and Leonie Sofia Neumann, guilty of breaching the peace and fined them 20,000 dinars, equal to about 170 euros.

Parenti, Neumann and their colleague Marina Bottke, who was acquitted of charges, were ordered to leave Serbia by February 7.

Caroline Tomalka, from No Name Kitchen, told BIRN that they are trying to appeal against the decision but are "not very optimistic" of success.

Sid is a small town in north-west Serbia on the Serbia-Croatia border, and is a well-known stopover for migrants who are passing through Serbia on their way to Western Europe.

The migrants are mostly accommodated in official reception centres, but some have been living rough. Some spend time in the abandoned Grafosrem factory during the day and sleep in tents in bushes nearby at night.

No Name Kitchen volunteers visit them twice a week, bringing them food, clothes and water.

Tomalka said that since January 18, people have been attempting to oust the migrants from their sleeping area by cutting down the bushes or destroying their tents and belongings. She said that some of them were wearing Chetnik insignia. The original Chetniks were World War II-era...