Turkish villagers give shelter to freezing migrants in Edirne 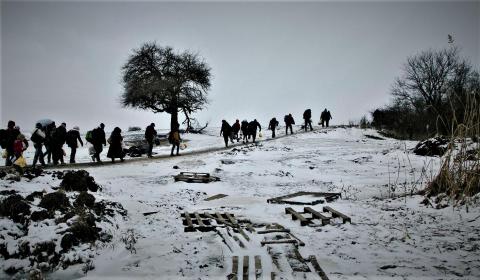 A group of migrants, some of whom were reportedly beaten and pushed back by the Greek police, took shelter at a tea house in a northwestern Turkish province, Demirören News Agency has reported.

A total of 80 migrants, who traveled back to Turkey via the Evros River (Meriç), were provided with basic needs by the villagers Kiremitçisalıh in the Uzunköprü district of Edinre, before being hospitalized, the agency said.

The migrants said they feared freezing to death at night on Feb. 5, before reaching the village.

The villagers gave food and clothes to the migrants and gendarmerie members took them to hospital, with some of them having fresh bruises, Demirören News Agency said.

Turkish security forces held a total of 340 irregular migrants attempting to cross into Europe through Edirne on a single day on Feb. 5, Anadolu Agency has reported.

According to sources, the provincial gendarmerie forces and police officers conducted operations against those seeking to enter Europe illegally.

Among the migrants held were people from Algeria, Morocco, Syria, Iran, Pakistan and Afghanistan. They were later transferred to provincial migration offices.

Turkey's Edirne province, which borders Greece and Bulgaria, is a key transit point for irregular migrants aiming to start new lives in Europe, especially those fleeing war and persecution.

But strict monitoring by security forces prevent them from crossing to the continent.

In 2019, Turkish authorities held a record 454,662 irregular migrants across the country, with about 60,000 caught while traversing the Mediterranean Sea.