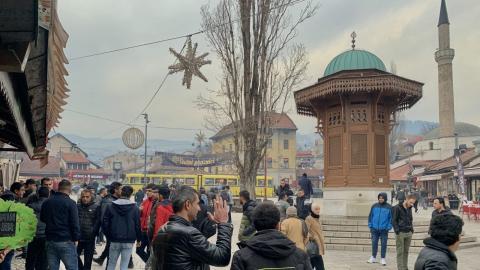 For now, he is trapped in Bosnia, like thousands of other migrants.

Since making two failed attempts to cross the border into EU-member Croatia, Ahmed must remain in Sarajevo until his next attempt.

"The Croatian police two times stopped us and returned us to Bosnia. For the last three months, excluding my two attempts, I have stayed in Sarajevo. I live in the city - and enjoy it," Ahmed told BIRN.

Ahmed says many other migrants, like him, spurn the allocated migrant camps set up in the country for the capital city.

"There are a few hundred migrants in camps but maybe there are nearly a thousand of us in Sarajevo," he says. "We live here, we go to cafés to chill, we eat in restaurants and we become part of the city life," he adds.

Group of migrants discuss where to go for a lunch at Sarajevo's old town. Photo: BIRN

As more and more of these migrants choose to stay in Sarajevo, they have created a new way of life for themselves and turned certain spots, including cafés, shisha bars and restaurants in the Old Town into their main meeting points.

Local café owners are delighted. "When we first saw well-dressed migrants paying high bills we were surprised, but we are not anymore, since we got used to it," Mirza Smajic, manager of a popular shisha bar in Sarajevo's Old Town, told BIRN.

"Migrants have become some of my best customers in recent months," he adds.

Smajic serves 10 to 15 migrant customers daily, and says they tend to pay 20 or 30 euros a time, which is more than most Bosnians do.

Smajic also says some shops and cafes have become unscrupulous, and charge the migrants higher prices.

"Some of the shop owners try to make it more...