Migrant Convoy in Serbia Turned Back at Hungarian Border 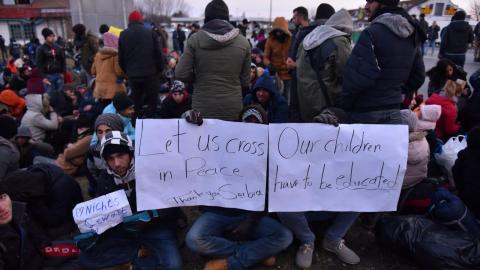 Several hundred migrants and refugees who tried to cross the border from Serbia to Hungary on Thursday night have been turned back by Hungarian police and moved to camps in Serbia.

The group arrived at the Kelebia-Tompa border crossing and spent the night protesting and attempting in vain to enter Hungary. Most came from Syria, Afghanistan, Yemen, Morocco and Palestine.

After gathering at the border crossing on Thursday, they were met by barricades and Hungarian police officers determined to stop them.

The migrants who had organised the convoy on social networks said they wanted to enter the EU. Some carried signs saying they were not criminals, were hungry, that their children deserve to be educated and that their families were already waiting for them in EU countries.

However, the Serbian Defence Minister, Aleksandar Vulin, who visited them on Thursday evening, called them "manipulated people brought here by false promises that someone would open the border for them".

Vulin accused "various non-governmental organisations" of inciting refugees to head to the border with no assurance that they would be able to cross.

According to a Serbian NGO, the Asylum Protection Centre, more than 1,000 people in Serbia try to reach the West every day. In January alone, Hungary reported 3,400 illegal entry attempts.

Migrants intending to reach European Union through Hungary gather in front of a border fence on the Serbian side of the border at the Kelebia-Tompa crossing. February 6, 2020. EPA-EFE/EDVARD MOLNAR HUNGARY OUT

Migrants intending to reach the European Union through Hungary gather in front of a border fence on the Serbian side of the border at the Kelebia-Tompa crossing. February 6 2020. EPA-EFE/EDVARD MOLNAR...