New Delhi votes with Modi's popularity on the line 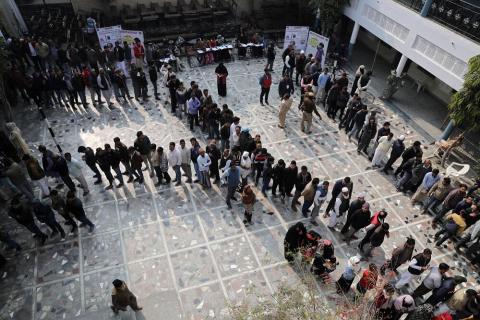 Voting began for a crucial state election in India's capital on Feb. 8 with Prime Minister Narendra Modi's Hindu nationalist party trying to regain power after a 22-year gap and major victories in a national vote.

Residents lined up in long queues across New Delhi neighborhoods, where a total of 14.6 million voters are registered to cast ballots.

Results will be declared on Feb. 11.

The polls pit Modi's Bharatiya Janata Party against the incumbent Aam Aadmi Party, or "common man's" party, whose pro-poor policies have focused on fixing state-run schools and providing free health care and bus fares for women during the five years in power.

The BJP campaign has reopened old wounds in the Hindu-Muslim divide and treats the election as a referendum on nearly two months of protests across India against a new citizenship law that excludes Muslims.

The law fast-tracks naturalization for non-Muslim migrants from neighboring Pakistan, Bangladesh and Afghanistan who are living in the country illegally.

Both of those actions have won him praise from supporters but little reward at the polls. BJP lost two important state elections last year.

Surveys by television news channels have predicted a clear victory for the Aam Admi Party in the 70-member state assembly. The Congress, a distant third party, has run a lackluster campaign and is expected to fare poorly.

During the campaigning, BJP members called for violence against minority Muslims by invoking the specter of archenemy Pakistan.

Critics have called the...