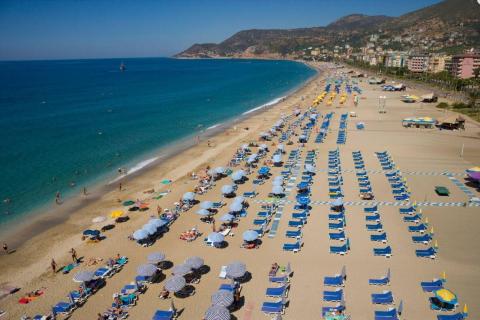 Turkey's popular holiday destination Antalya, on the Mediterranean coast, welcomed more than 186,000 foreign tourists in January, according to the head of the Turkish Hoteliers Federation (TÜROFED).

"Foreign tourist arrivals in Antalya increased by 31 percent and marked the highest number of foreign tourist visits on record for the month of January," Sururi Çorabatır said.

Antalya is particularly popular among German and Russian tourists, but the city has been attracting more visitors from countries such as Poland, Slovakia, Albania, Czechia and Romania, according to Çorabatır.

He noted that the coronavirus outbreak may have some impact on the tourism industry.

"Tourism activity in Istanbul, the Cappadocia region and Pamukkale could lose steam, but this should not last too long. I do not think the Turkish tourism will be adversely affected," Çorabatır said.

Visits from China may slow, but this possible decline could be compensated by attracting tourists from other markets, he added.

Early reservation figures suggest that the tourism sector will record a double-digit growth this year, according to Çorabatır.

"We have already seen increases in the number of tourist arrivals in Antalya and Istanbul at the start of the year. If other regions experience a similar demand, Turkey will host more than 57 million tourists in 2020," he said.

Last year, 14.6 million foreign tourists visited Antalya, some 32.5 percent of all international visits, while Istanbul welcomed 14.9 million holidaymakers, which corresponded to 33 percent of the total.

In 2019, Turkey generated a total of $34.5 billion in tourism revenues by hosting nearly 52 million international holidaymakers.

The country aims for higher tourism...