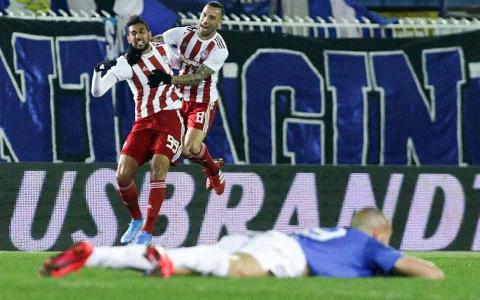 Ahmed Hassan returned to Olympiakos on loan from Braga a few days ago to boost its firing line, and the Egyptian paid the Reds back immediately, scoring in injury time at Peristeri to keep them alone on top of the Super League table.

The Piraeus giant won 1-0 at Atromitos on Sunday through that 91st-minute goal to remain two points ahead of PAOK despite playing the last 20 minutes with 10 men due to the red card shown to Omar Elabdellaoui. That was just 11 days before the Reds' first clash with Arsenal for the Round of 32 of the Europa League.

In a weekend that had just eight goals, half of them came from PAOK in the same half. as the champion defeated visiting OFI 4-0.

After a barren first half at Toumba PAOK scored through a Chuba Akpom brace and goals from Lazaros Lambrou and Douglas Augusto.

The Athens derby on Sunday mostly had local pride at stake....