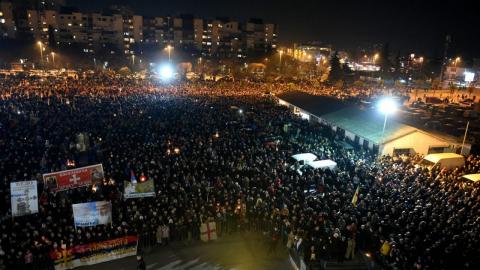 The assembly of the Serb-led entity in Bosnia, Republika Srpska, is likely to adopt a "Declaration on the Situation of the Serbian People in Montenegro" at its next session, following the popular protests over a new religion law, led by the Serbian Orthodox Church, that have been going on in Montenegro for weeks.

Nebojsa Vukanovic, an MP from the opposition bloc in the Republika Srpska assembly, has proposed the document, which will be debated on 18 February and expresses, among other things, "deep concern about the position of Serbs in Montenegro and frequent examples of violations of the basic human and civil rights of the Serbian people".

Vukanovic proposes that the assembly condemn what he called "discrimination against Serbs in Montenegro who have been relegated from almost every sphere of decision-making and management".

The Declaration will likely be accepted as its sentiments match those of the ruling party in the RS, led by Milorad Dodik, Serbian member of the...