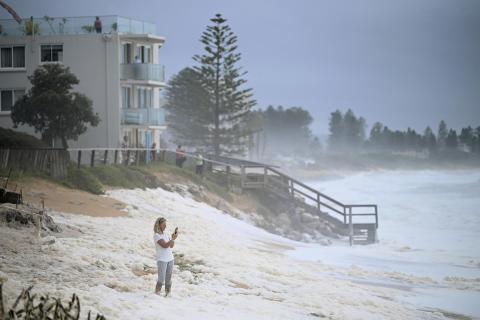 The weekend drenching represented the biggest sustained run of rainfall in Sydney and surrounding areas for 30 years, dousing some bushfires and replenishing depleted dams across New South Wales, the country's most populous state.

Some rural areas received more rain in recent days than they had in the entirety of the past year - a startling and swift turnaround from the bushfires that have killed 33 people and ravaged large parts of the east coast.

"It's amazing what the smell of the rain can do to people's spirits," Ben Shields, the mayor of the inland city of Dubbo, told Reuters on the phone.

Like many other rural towns, Dubbo has been beset by duststorms and subjected to water restrictions on the back of a three-year drought.

James Jackson, a sheep and cattle farmer in the drought-hit Guyra district some 500 kilometres north of Sydney, told Reuters the region was starting to turn green again.

"This one event won't replenish the whole soil moisture profile. We'll need a couple of these, but this is certainly a good start for those people who got it," said Jackson, who is also the president of industry body NSW Farmers.

"I have two-year-old sheep who are seeing green grass for the first time."

Bushfire warning signs were almost swamped by floods in several areas as the weekend rainfall cut power to tens of thousands of homes, caused travel chaos in Sydney and closed scores of schools for the start of the week.