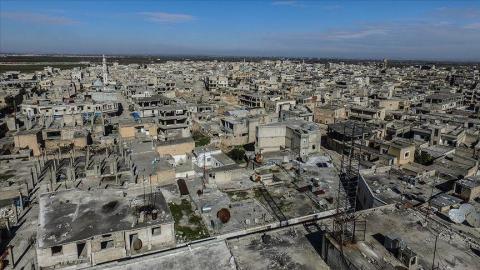 Turkish and Russian delegations have resumed meetings on Feb. 10 to resolve Syria's Idlib dispute, Foreign Minister Mevlüt Çavuşoğlu has said, underlining that talks would continue at the leaders' level if today's negotiations fail to bring about a solution.

There has been no consensus with the visiting Russian delegation at the talks on Feb. 8, regarding the escalating situation in Idlib, the minister said, speaking at a press conference with visiting Slovenian Deputy Prime Minister and Foreign Minister Miro Cerar.

"If a compromise had been reached, there would have been no need for today's meeting," he told reporters.

Two parties exchanged their proposals in Saturday's talks, the minister noted. Between the two sessions, the Russian delegation visited Jordan and came back to Turkey, Çavuşoğlu added.

He recalled that President Recep Tayyip Erdoğan stressed that Turkey would take the necessary measures if the regime continues its aggression in Idlib.

"It is not possible to talk about the political process, the constitutional commission, while the regime remains aggressive, so many civilians die and have to leave their home," Çavuşoğlu said.

He noted that if parties fail to yield a result in the talks in Ankara. The Russian and Turkish leaders can meet in the upcoming days.